When Tim Sweeney released ZZT in 1991, his idea to encourage new ZZT content was to hold a world creation contest. Over two hundred submissions eventually resulted in the releases of the “Best of ZZT” compilation and the “ZZT’s Revenge” collection in 1992. They also provided an initial hiring pool for the then-new game development company Epic MegaGames.

The most valuable recently discovered information on the contest has been provided by Beth Daggert, one of the contest winners and an early Epic MegaGames employee. She discussed the development process for her entry, “Ezanya”, the submission process, and the aftermath in this interview with Dr. Dos. She also provided scans of the newsletters and relevant paperwork.

As part of my now years-long effort into archiving the history of the ZZT community, I have been reaching out to many early ZZT creators, trying to gather as much information and data as possible. While many attempts are unsuccessful or end empty-handed - it has been thirty years, after all - I’d like to share two sets of recollections which resulted in interesting historical information about the contest’s entries.

Note: The post is mostly based around quotes, with a little bit of context here and there. If you don’t know what ZZT is, I recommend checking out the Museum of ZZT first!

Allen Pilgrim is perhaps best-known for his work on the games “Kiloblaster” and “Xargon”, but he was also a developer on the “Monster Zoo” game world bundled with Super ZZT, as well as “Fantasy” released within ZZT’s Revenge. 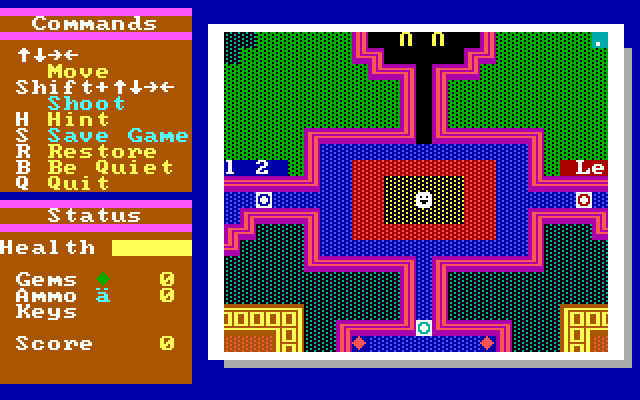 A 2010-2015 interview with Allen conducted by RGB Classic Games provides the following information:

I was playing a game called ZZT which was by Potomac Computer Systems (PCS) founded by Tim Sweeney. […] ZZT had an editor and I created a game called “The City of Hope.” Tim was having a game-design contest using the ZZT editor and my wife said that I should enter the game I created. I said there was no way I would have a chance.

So on June 27, 1991 I decided to create a completely new game for ZZT. That game was “Fantasy” and is the one I submitted to PCS. Tim called me and said that it was by far the best game they had received. He said, “I have a proposition for you.” He proceeded to tell me about his ideas for Super ZZT. He wanted me to create one of the episodes. I created “Monster Zoo.” He loved it so much that he made it the Shareware version.

However, I managed to receive some additional bits of information from Allen in early 2021. What follows is a diary quote from August 12, 1991:

Got a letter from Tim Sweeney, author of ZZT, that blew me away. He said that the 2 games for the ZZT contest that I sent in were definitely the best so far and that my games are, “creative and very refreshing.” Those games were ‘City of Hope’ and ‘Fantasy.’ He said he would like me to be the writer of the 3rd game in the new SuperZZT trilogy called ‘Monster Zoo.’

This primarily allows us to date and give context to the response. However, it is interesting to learn that “City of Hope” - which is an unpreserved world - was actually submitted to the contest!

In addition, the following brief development note was mentioned:

We didn’t have much documentation for SuperZZT.

Only one board credited to Tom Breton survives, but it’s absolutely fascinating. 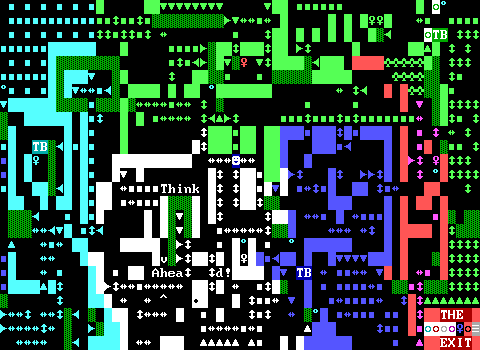 “Machinations” is a very complex slider puzzle featured as an optional (!) board in “Best of ZZT”. It is so complex that no proof of solution existed until a $25 bounty from Dr. Dos led to this video from Lachesis.

Miraculously, I’ve managed to reach out to Tom Breton - who goes by the nickname Tehom - and received a surprisingly lengthy response on his role in the world creation contest!

First, I must mention Chris Tavares who colored the board for me. I had only a black-and-white monitor at the time so I asked his help. “Your swaths of green trees were actually purple”, he told me.

This quote is interesting, as it simultaneously explains the peculiar coloring and implies more artistic intent behind the board’s layout than one might have initially assumed.

The backups [of status unknown] would include the solution that Tim saw. It’s not in the form of notes, but in the form of a file of explicit keystrokes for a DOS keyboard-macro program whose name I don’t remember now.

I had designed Machinations so that it was possible to fail at the very first keystroke and not realize it until much later. That’s a very annoying way to design a puzzle, I understand, and I am impressed that your community member was able to solve it.

Makes sense that this board would require proof of solution to be featured. What is fascinating is that a keyboard-macro program was used to preserve it - a duct-taped equivalent of a replay file!

There was one other board that I entered in the contest that I called “Transporter etude”, that somehow got into Best of ZZT in a mangled but recognizable form with Scott Hudson’s name on it. It’s clearly the same board, >95% of it is intact, but he had apparently found it difficult and made holes in walls that you could just walk thru instead. It is jarring to see your work with someone else’s name on it. I don’t assume malice on his part; perhaps it was just a misunderstanding. I have two letters from Tim Sweeney that mention Transporter Etude. He did recognize it as my work and promised to make it right with a second prize, which I never took him up on.

Interestingly, the board itself indeed appears to have no credit. However:

In this light, it seems to me to indeed have been a misunderstanding; however, when the alleged modifications are added on top, it becomes clear how it can have felt jarring to the creator.

I was rather proud of it Transporter Etude in its original form. It was a timed puzzle, and if you understood how to use transporters, you could easily beat it. I regularly completed it in about 1/3 the given time, so I didn’t feel it was too hard physically. As I recall, the intended solution involved exploiting some quirks of transporters: moving blocks so that a free-standing transporter would switch to teleporting to a farther transporter so that you could zoom around the board in just a few steps to block all the lava, and there was something about pushing a block you needed ahead of you into a transporter instead of dragging it around the board the long way. I sent Tim the solution to this too, same format.

I think I sent him one more entry, possibly a level I did where the gimmick was that you were blocked by blue keys, and you already had a blue key so you couldn’t go thru, but after you found the blue door you could use your key on the door and then get thru the wall of keys empty-handed, gaining a key. Reversing the role of key and door, you see. I may have called it “Ka-blue-key theater”. But like I said, 30 years ago so it’s hazy.

Unfortunately, this board is - at least as of right now - unpreserved.

In general, ZZT was a blast. It was (one of?) the first user-extendable games. As Tim mentions somewhere, it was inspired by Kroz, a popular DOS game of that era that I had played too. It was like a programmable Kroz. I liked that aspect, and people did some clever things with it. I never really got into SuperZZT though.

The Kroz inspiration is a fun one - Tim is known to have argued both for and against it in the past.

Super ZZT ended up becoming quite unsuccessful due to a mix of factors - primarily the hidden, undocumented and less polished editor. However, I personally feel that the smaller, scrolling viewport, while better for certain types of games, was nowhere near as aesthetically versatile as the much larger non-scrolling boards of ZZT. All in all, given the relatively poor reception of Super ZZT in the broader community, it’s quite understandable why Tom also didn’t think much of it.

Nowadays almost nothing I program is game-related. I did a fair bit of programming on maintaining Lawrence Raphael Brothers' fascinating roguelike game Omega, but that was also many years ago. Those were the days!

Massive thanks to Tom Breton for such a lengthy response and many insights!