As well as today, if you know where to look.

We have a right to play modded Minecraft without corporate interference.

Third party downloads are not worse than AdBlock.

While I’d love to just agree, people have gotten used to the status quo of a small portion of Minecraft modding. Time for a history thread, strap in!

Most players who started their modding journey after 2015 don’t realize that the modding landscape used to be very different. Pre-CurseForge, many big mods used ad shorteners like AdFly to make revenue off downloads - and strictly prohibited mirroring the mod, even in modpacks.

Here’s an example: RedPower 2, one of the most popular mods in the pre-1.5 era. This is the updated policy - for some time, all modpacks required explicit permission. (The mod was closed source, too.)

All my mods are copyrighted material. They may only be downloaded from the links I provide. You may download them to use and play, if you want to do anything else with it, you have to ask me first. Full terms and conditions are available on the download page on the blog.

Due to the alarming number of new modpacks wanting to include RedPower lately, and my inability to possibly evaluate and answer everyone asking, I’ve decided to cut way back on allowing it.

Many other popular mods were even stricter. MystCraft flat-out refused to give permission to anyone after a certain point.

This is mine. I’m not responsible for what it does to your data or computer. You may not distribute it as is or modified. You can install and play this mod wherever and however you see fit. You may have fun playing this mod. Modpacks are not allowed excepting those that already have permission.

I can keep going. Twilight Forest, another beloved mod, had a “no public modpacks allowed after a certain point” policy - generously, it allowed private modpacks, at least.

Private mod packs: Private server packs are fine. If your mod pack is intended for use on a specific server, and you only distribute it to people playing on that server, go ahead.

OptiFine, often cited for ignoring the EULA, isn’t the outlier, by the way - it just never moved on from this era.

Some of you might ask: what happened if you simply disobeyed these licenses? Technic was a popular group which ignored modder copyright for a long time. In light of this, one popular mod - Forestry - decided to purposefully break the mod if it detected the Technic launcher being used to launch it.

The mod author was angry at the creators of Tekkit for redistributing his mod without his permission, so he added code that checked to see if the mod was being launched via the Tekkit launcher.

It made all bees hostile by default and attacked players.

When CurseForge entered the scene in the mid-10s, some modders did indeed warn of the corporate interference that would inevitably happen. I was a late adopter myself! However, the community preferred the possibilities of actually being able to legally build public modpacks.

Remember that before CurseForge, there were only a few major pack dev groups - FTB, Technic and Resonant Rise come to mind. Most of them essentially had to maintain spreadsheets with information on the grounds under which they are including every mod.

What happened if you couldn’t get permission? Well, you could just ignore that (like Technic used to in the past) or do what ATLauncher did, and ask the user to download the mod manually. Sounds familiar?

Some mods that we have permissions to distribute we do so, other mods which haven’t given us distribution rights we don’t distribute your mod files. Instead we link the users to your download link, whether it’s hosted on AdFly, MediaFire, your server or any other place. The user then goes through the install process on their own and places the file in a certain folder and the Launcher does the rest.

By doing this, it negates the need to seek permission as we aren’t distributing the mod in any way.

You might be thinking something along the lines of “okay, how come the community accepted such a terrible deal?”

“Terrible”? Let’s see how the Spigot plugins side of the pond is doing- … oh. 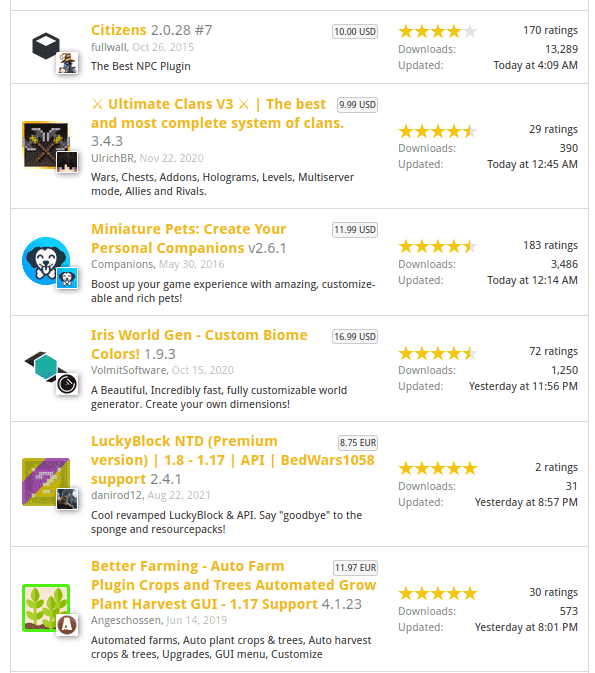 These are very popular plugins, mind, and my back-of-the-napkin calculation does not take into account promotions or discounts, if any happened. However, when people say “OptiFine is ignoring the EULA”… Well, it’s not just OptiFine, let me tell you that. Even in the Forge/Fabric modding scene, there were both Patreon-exclusive “early access” mods (one popular mod had their closed beta, bringing in many hundreds of dollars a month, last over a year) and attempts at making actual paid mods.

My point is: most mod authors in the Minecraft modding scene have always been trying to get money for their labor. There were a few making them primarily for passion, promoting free/open source modding. A few didn’t even migrate to CF at all - like immibis. That wasn’t the norm!

I’m not much of a CurseForge supporter. I’ve spent over 2 years not putting my mods on it, until it was clear that this was what most of the scene wanted. Unfortunately, in the current world, the benefits of a for-profit ecosystem also lead to the inevitable drawbacks.

There are some aspects people don’t seem to consider. Without the profit motive, how many mod authors would have quit much sooner, not updating their mods? On the flip side, how many would have been more eager to adopt experimental but promising projects like Fabric/Quilt?

But ultimately, what I’m trying to say is that “a world without CurseForge’s monopoly and its consequences” is not necessarily a world where you’d get to reap all the benefits of it - because, in most of the scene, the situation is very different.